A punt on dinner 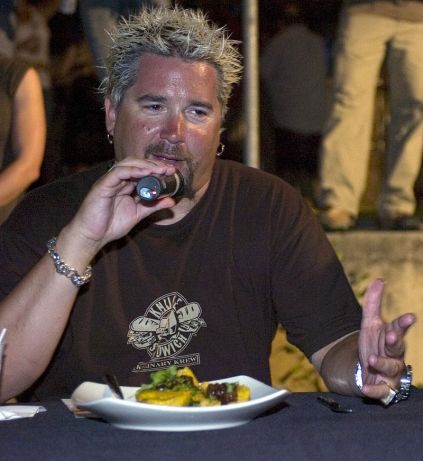 Guy Fieri is rarely off my telly. For two reasons. His bleached, spiked hair turns up on a heck of a lot of programmes and, if I’m honest, I do tend to spend a lot of time watching food channels.

You see he’s made his name as America’s rock ‘n’ roll comfort food king, all tattoos, shouty delivery and mac and cheese. And if the hype is to be believed he may very well turn out to be the saviour of Atlantic City.

And if ever there were a place that needed saving, it is the New Jersey city that gave New Yorkers the chance of a flutter and the rest of the world Monopoly and Boardwalk Empire.

It’s deep in a losing streak. Take a ride up and down its famous boardwalk in a rolling chair – essentially a wicker basket on wheels – and the signs of decay are everywhere.

At the far end stands the Revel, a sleek, glass gaming emporium that was billed as a “game changer” when it opened two years ago at the cost of $2.4 billion. On Monday, a croupier called “last hand” at the all-but-deserted blackjack tables.

It is one of four casinos shutting this year as other eastern cities develop their own gambling resorts. Internet gaming has cut into everyone’s profits.

Things are so bad that Donald Trump has started legal action to have his name removed from two casinos that he used to own. 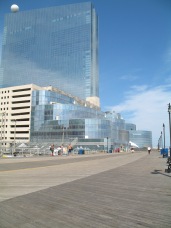 The Revel cost $2.4bn when it opened two years ago. It shut last week.

The summer still brings plenty of punters. When I arrived in Atlantic City on a Wednesday after Labour Day, it took me 30 minutes to check into my hotel, Bally’s, such was the number of visitors (and scarcity of tills).

We came by bus from New York. It stopped first at the city’s bus terminal and then (paradoxically to my mind) it continued to the hotel, where it pulled into a basement bus bay that could handle a dozen or so at a time. This is still big business.

But the place is faded. The hotels have lost their lustre. Many are shut. The whole place, with its seaside nicknack shops and ice cream stands, reminded me of Eastbourne or Bexhill, the British south coast resorts close to where I grew up, their glory days a long time forgotten – only with more chewing gum and leisure suits.

Bally’s vast gaming room did at least seem busy as darkness fell. Pensioners shovelled tokens into slots without smiling. Waitresses ferried giant sodas back and forth.

The problem, however, is that Atlantic City remains dependent on its slots and baize tables. Las Vegas has at least diversified, bringing in David Copperfield and the sort of high-class drinking and shopping facilities that attract Premiership footballers and their Wags. Its restaurants have 18 Michelin Stars between them.

Which is how I found myself with my feet stuck to the floor of Bally’s gum-dappled elevator floor on my way to Mr Fieri’s Chop House, which opened this summer as part of an effort to tart things up in Atlantic City.

He certainly hits the right demographic for the Bally’s crowd – people who I suspect watch a lot of TV and think it acceptable to wear a hat in a restaurant. But it’s still a gamble. He doesn’t exactly do much cooking on his shows. And it seems risky to put a man best known for “Diners, Drive-ins and Dives” in charge of your kitchen.

Apparently, however, he’s turned over his name and his recipes to Caesars – the casino owners – leaving them to take all the decisions. The result is kind of fun. It’s a big bar and steakhouse with leatherette banquettes in booths, serving a mix of his trademark comfort food and slightly more refined dishes.

And so it is that from the Bad Boy Steakburgers (which I must admit I kept wanting to pronounce in Jamie’s Essex accent) section I feel obliged to order the Bacon Mac ‘n’ Cheese Burger.

The burger came nicely charred. It was grilled over cherry and oak wood, although with the stodgy dollop of macaroni cheese, those flavours were ever so slightly lost.

The pasta was pretty gloopy. But that didn’t matter. The end result was a pretty satisfying blend of carbon and creamy cheese.

After the fake Wild West saloons and sticky carpets downstairs, the chop house made for a nice change.

And if it’s not enough to save Atlantic City, well, there’s still Celine Dion.

This entry was posted in Uncategorized. Bookmark the permalink.