Hurricane or no hurricane, you can rely on the American Coffee Shop

It was the only place open. Its neon window sign proclaiming invincibility in the face of Hurricane Irma.

The American Coffee Shop was open at 8am. I hadn’t had coffee in more than 36 hours and my body was protesting.

The queue, a day after Irma smashed through Florida, stretched down the counter and out of the door. Three quarters of Broward County – including Fort Lauderdale – had no power and needed to go out for their coffee. Not just any old coffee either.

Every person in front of me wanted a cappuccino or a cafe con leche. Surely in a time of crisis you’d all pull together and just get the drip, rather than asking for a sodding almond milk crapuccino with sprinkles. Oh and while I’m here maybe give me five frothy nothings, with arse shavings. But not in the coffee, mind. On the side. And can I pay with a card?

I took my coffee black. Paid cash. It seemed like the decent thing to do.

By this time, I’d already pulled a pretty full day. I’d tracked down a trailer park and interviewed a handful of residents who – for reasons that remain no clearer to me  –decided to stay in their mobile homes rather than run for a shelter.

Coffee restored my balance, enough to try and fail to reach the beach (turned back by the Law) and then get back to my hotel to file.

My journalist’s emergency snack pack was depleted. I had finished the jerky and was half way through my pack of mini-cucumbers. I would have to venture back out for lunch.

Longest traffic line I've seen today in Fort Lauderdale is not for fuel but for a McDonald's drive-thru #IrmaHurricane2017 pic.twitter.com/3N9uiACpWx

As I drove towards the American Coffee Shop I passed a McDonald’s with a drive-thru. The queue backed up for half a mile. Irma had sparked the great pattie panic of 2017.

The American Coffee Shop was no quieter. The counter and all the tables were full. Orders were shouted back and forth, sometimes in English, more often in Spanish

“It has been like this since 6.30,” said the grillman and owner Nelson, as he manipulated three omelettes at a time. “It hasn’t stopped.”

They were out of bacon and low on everything else. The bin at his feet told the story of the day in eggshells. 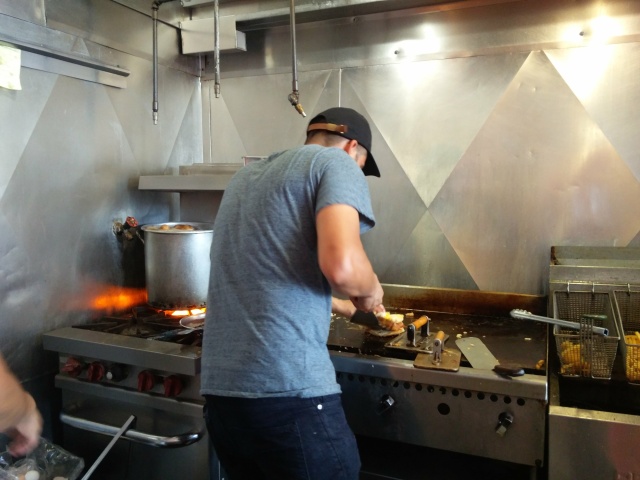 My cheeseburger order (medium, American cheese) went up on the order rack, written out on a piece of paper that gradually became more transparent every time it was moved and another fingerprint of grease applied.

Only it didn’t move at first.

I watched eggs crack and Cuban sandwiches pressed on to the griddle. Grits and oatmeal were mixed and slopped into bowls. Someone ordered bacon and then unordered 15 minutes later when the mistake was spotted.

A British family sat in the window. They were veterans of these storms and had weathered it like everyone else.

While they waited for their meal, the father said it was one of the rare occasions when South Floridians pulled together. He had checked on his neighbours first, then his friends and then his business.

“It is not normal for people here to come together like this,” he said.

This was my first hurricane. The power at my hotel had stayed on (albeit at reduced voltage in a brown out). My coffee cup was being refilled in short order and I had a burger on order (although my ticket had yet to move). This was not how I expected it to be.

Yet, I could sense impatience all around. The queue at McDonald’s. The drivers ignoring police warnings to stay off the roads. Worse, those that were on the roads were speeding through junctions where the traffic lights were out – rather than treating them like four-way stops (and if you’ve never navigated a multi-lane four-way stop then you have no idea of the sheer terror they hold).

And at the American Coffee Shop, Nelson senses the tension. “Almost there,” he says as he flips out another set of pancakes and my ticket moves a step towards the front of the queue. He later tells me a couple of customers walked out, impatient at the wait – a day after a deadly hurricane ripped through the city, keeping businesses closed, taking down powerlines and prompting food and water shortages…. sheesh.

I had spotted the shop on Saturday, as Irma roared in. While other coffee shops were closing early, they kept going as late as possible. Nelson told me there was no question of not opening the day after Irma blasted through.

Finally my burger was on the flatplate grill. It was flipped twice and then the slice of yellow cheese was plonked on top. It was all served on top of a toasted bun, with lettuce, tomato and onion.

The fries were cold. But I had got the very last batch. With a dollop of ketchup, I felt myself a lucky man. A hurricane survivor with a juicy burger in my hand.

“Summer, lock the door,” Nelson called to the waitress.

They were done for the day and with one last refill of coffee I was on my way.

This entry was posted in Hurricane and tagged Florida, Fort Lauderdale, Hurricane Irma. Bookmark the permalink.

1 Response to Hurricane or no hurricane, you can rely on the American Coffee Shop